The Evzones: The Greek Presidential Guard in Athens

The Presidential Guard in Athens, the Greek soldiers at the Tomb of the Unknown Soldier – the so-called Evzones – are an impressive attraction. Even after living in Athens for 20+ year, I always find these traditionally dressed guards fascinating. A visit to Athens is not complete without watching these elite members of the Greek army. They have become a visual icon and synonymous with the city of Athens. This post will tell you about the changing of guards and my visit to the army camp of the Evzones, the Greek Presidential Guard in Athens with Kids.

Evzones: The Greek Presidential Guard at the Tomb of the Unknow Soldier

The Evzones were originally founded in 1868. An Evzone is also known, colloquially, as a Tsoliás. Evzones are the most famous soldiers of the Greek military for they stand proudly in perfect stillness in front of the Hellenic Parliament. The Evzones in Athens are originally historical elite light infantry and mountain units of the Greek Army but their name nowadays refers to the members of the Presidential Guard, the ceremonial unit that guards the Greek Tomb of the Unknown Soldier.

Where to watch the Changing of Guards?

The Presidential Guard at the Acropolis

A very special event that I was lucky enough to witness is the ceremony of the Evzones at the Acropolis. You have the climb the rock at 8am or be the last to leave at its closing time at 8pm (summer) to watch the Evzones making their way to the Greek flag on the Belvedere. Each Sunday, the Evzones raise the flag in the morning and lower the flag at sunset, accompanied by members of an Athenian marching band playing the national anthem.

Other duties of the Evzones in Athens are presenting arms and welcoming foreign leaders, accompanying the President of the Hellenic Republic on official visits abroad, the annual participation on March 25th military parade in Athens and the October 28th military parade in Thessaloniki. If you are lucky enough to be visiting Greece during that time with your family, do not miss a chance to see them!

If you want to teach your children more about Greek history, folklore and culture, or you simply want to be amazed by these special guards standing still or marching through historic monuments, than do not forget to miss your chance when visiting Athens.

I have been living and working in Athens for many years and have been on numerous tours and walks in the Greek capital. But I never had the opportunity to make a visit to the Presidential Guard Army Camp because it is not open to the public. However, the special privilege was provided by Livin’Lovin and proved to be an unforgettable experience. During a presentation by one of the officers at the army camp, I learned everything there is to know about the unbelievable historic bravery of these elite soldiers in the wars, about their history and symbolism, their uniforms and arms, their different names throughout the history and the different ranks, training, and functions.

To become an Evzone, there are several criteria. Among other, a soldier must have a height of no less than 1.87 meters and excellent physique, which can be tested during the long and strenuous training that can last several months. Their notorious training involves the development of the ability to stand still for an entire hour and the synchronized ceremonial steps. In order to protect the Evzones’ blood circulation following the motionless 60 minutes, the ceremonial steps are carried out in slow motion.

The uniform of the Presidential Guard has a historical meaning referring to the uniform of Greek warriors during the War of Independence in 1821. The white skirt of the uniform has 400 folds to represent the 400 years of Ottoman occupation over the Greeks. Each side of the white shirt sleeve also has 200 folds. It was amazing to feel this fabric of high quality in my hands and see how it is made in the on site Evzones workshop.

The uniform consists of the red phareon hat, made from red baize with a black tuft, the white shirt with wide leaves, the phermeli, which is the waistcoat and it is the most difficult part to construct, handmade, the Greek kilt created with meters of white cloth and the so typical tsarouchia, the traditional shoes of Evzones which are red, made of leather, with a small tuft in front.

There are the fringes, blue and white standing for the Greek flag, the garters which are made of silk, the leather belt, the inside garnet, and the gun which is the most difficult piece to carry, not only for its gravity but also for the physical pressure that exerts to the soldier’s body. This is the official version of the uniform that the Evzones wear only on Sundays and National holidays. The other days, the white shirt, the phermeli and the Greek kilt are replaced by the so-called doulamas, a special uniform that the soldiers of the Macedonian Struggle (1904-1908) used to wear. This uniform is blue in winter and brown in summer. In official ceremonies, the Evzones also wear the traditional uniforms of Crete and Pontic Greeks.

The Evzones at the Hellenic Parliament

The Greek Parliament building is located at Syntagma square in the heart of Athens. This former Royal Palace is a beautiful building with a special history. In case you want to know more about the Hellenic Parliament, I suggest you book a visit.

How to arrange for a visit to the Hellenic Parliament

English language guided tours are held every Friday and Monday at 15:00, during June, July and September. Each 1hr30min long guided tour is free of charge and offers visitors the opportunity to discover the Assembly Hall, as well as to learn about Modern Greek history, the form of government in Greece, parliamentary procedures and the history of the Hellenic Parliament building. Book your visit at [email protected] at least 5 days in advance. For up to date information about prices and timetables, please follow this link: hellenicparliament.gr.

After watching the Evzones and the Parliament building, you can take your kids across the road to the central Syntagma square with its large fountain and many cafes. Here they can run around freely, sit on one of the benches in the shade or have a snack. The square is stroller friendly. There are many steps but there is a way to go around and avoid the steps.

Enjoy your visit to the Evzones or the Greek Presidential Guard in Athens with kids. And if you liked this post, pin it for later!

For more inspiration and tips for activities in Athens, check my post Athens with Kids top things to Do. 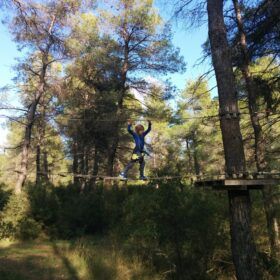 The Adventure Park great for kids and teens 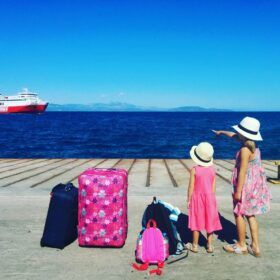