Knossos, where myths are real

There are some very fascinating facts about Knossos and you should not leave it out of your itinerary once you’re visiting Crete.

The Minoan civilization flourished between 2600 to 1100 BC and the palace of Knossos is an architectural gem among the most important in the whole world.

My advice before you get there is a small revision in history and mythology.

When history embraces mythology in such a vivid way, you can’t help but wonder where mythology ends and history begins.

Minos the legendary King was the son of Zeus and Europa and he is associated with the famous Minotaur, the Labyrinth, Theseus, Daedalus and Icarus which I strongly recommend you revise before you visit with your children as it stimulates their fantasy and makes them look forward to the visit the mythical palace.

The whole site was first discovered in 1878 by a local merchant called Minos Kalokerinoswho brought the first findings to light, but the actual excavations began in 1900 by Sir Arthur Evans and lasted 30 years.

I can’t help but wonder what it would have felt like to bring such treasures to light.  Frescos with colours that time hadn’t touched and leave you breathless.

Jewellery that reflects the style and the techniques of talented technicians. A drainage system like no other in any other ancient city. Storage rooms and warehouses that reflect prosperity and finally the throne room which stands there untouched! 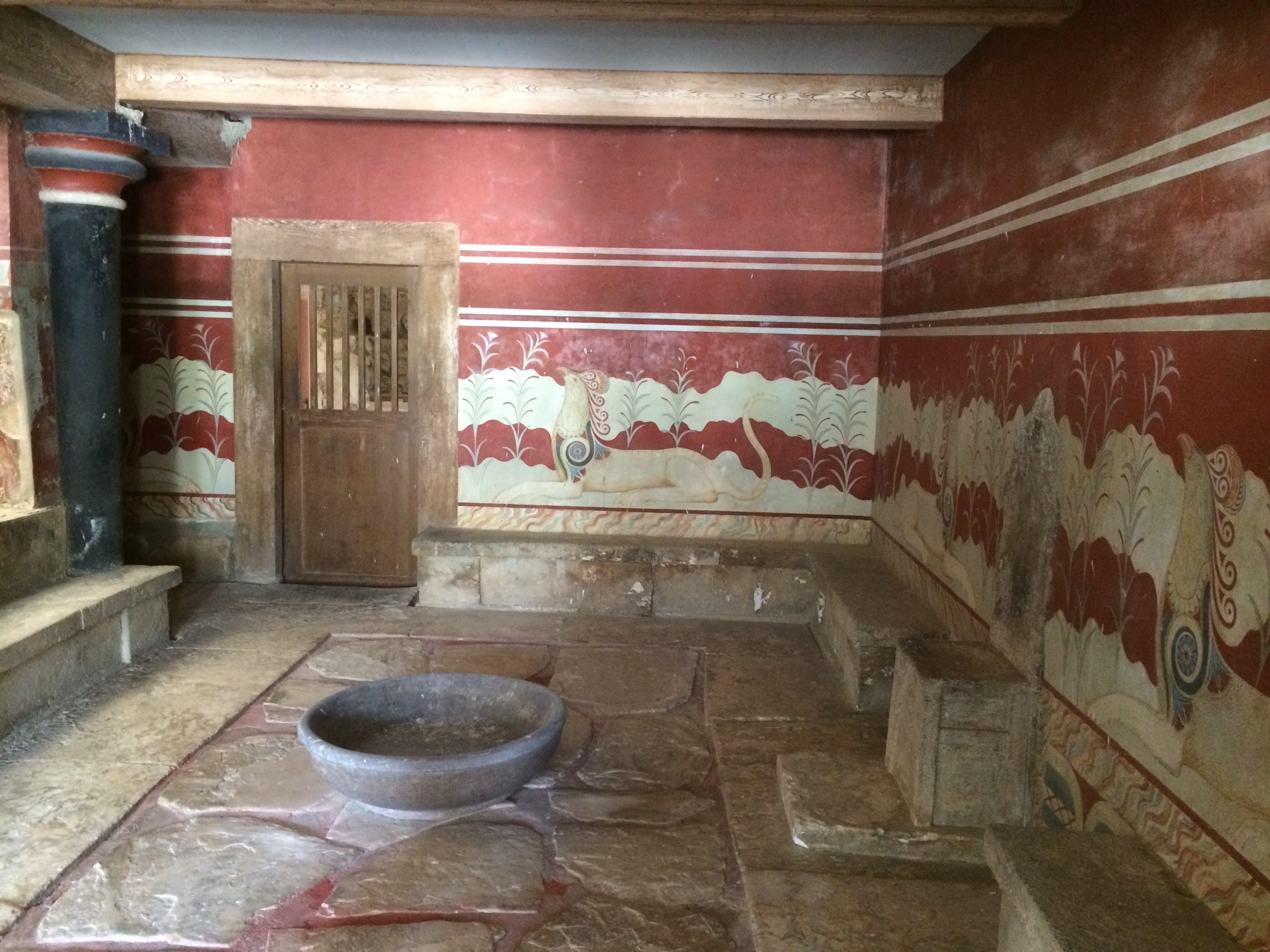 Minos was recognized for his sense of justice, and an exact replica of his throne sits at the International Court in The Hague as a reminder of Justice vs war. The Minoans were also very peaceful and basically practised trade and collaborations with all nearby countries exchanging products.

The religion of the Minoans according to the findings was highly related to Nature and a complex of deities, the most famous of which is the goddess of the snakes! Bulls were also considered sacred. Bull-leaping, especially on religious occasions was an impressive practice which was performed by brave athletes and never led to harming the bull.

The horns of the bull is a strong symbol of Knossos which will see in many places as well as the double axe “Labrys”, either a mystic symbol or a tool with astronomical use.

Like all great empires or the physics laws what has a rise has also a fall. Knossos was palace was not destroyed one but actually two times due to natural disasters such as earthquakes and the eruption of the volcano of Santorini in 1450. This time the palace was flattened forever and although Knossos continued to exist, the palace was never reconstructed.

The precious findings of the excavations, as well as the original frescos, are displayed along with other findings such as jewellery, coins, artefacts etc, in the archaeological museum of Heraklion which is located in the center of the City.

A combination of both as they are located very close is ideal to fill your day with the glory of the past and get inspired enough to get motivated according to your own desires. I hope I have also inspired you and motivated you to consider visiting this immortal treasure.

There are many ways to visit Knossos with your family. They are listed in the blog post Knossos Crete with Kids Tips. If you want to skip the lines and enjoy a walking tour around the site have a look at this skip-the-line offer.  Older kids may enjoy a self-guided visit by smartphone audio guide. The Minos’ Children: Daily Life in Knossos Tour is a self-guided audio walking around in Knossos. For more information about private guided tours, have a look here.

I hope you will enjoy your visit to the Palace of Knossos as much as we did. Let us know your experience by leaving a comment in the box below or send us an email. We would love to hear from you! 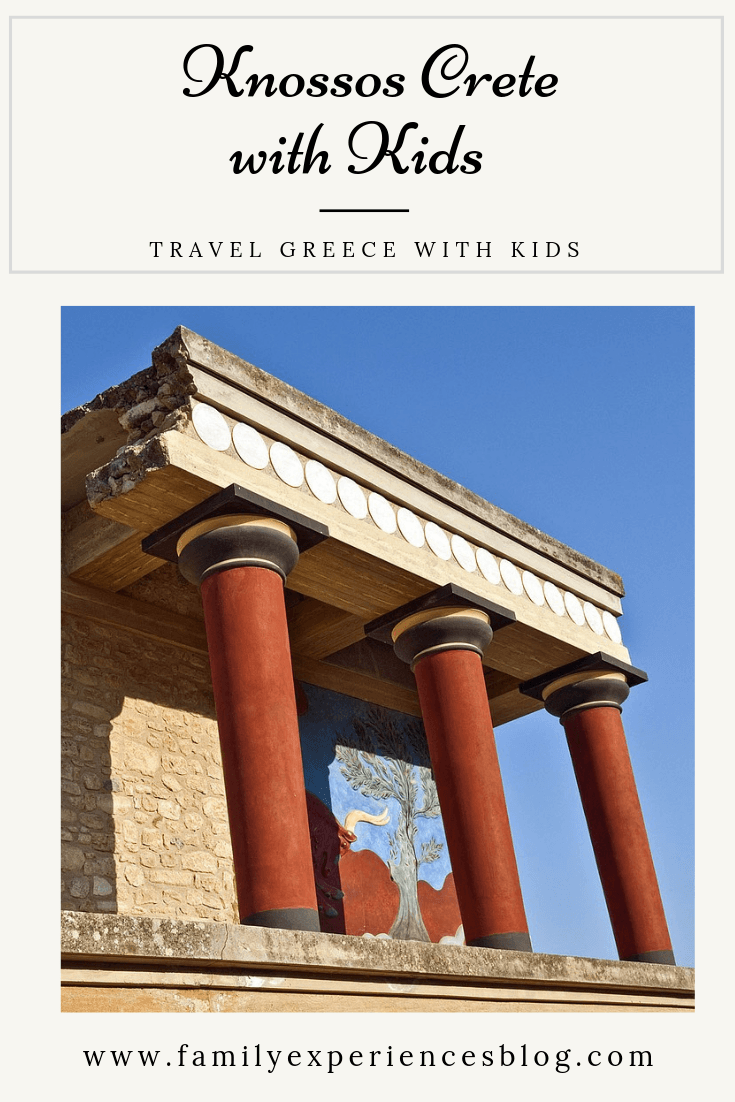 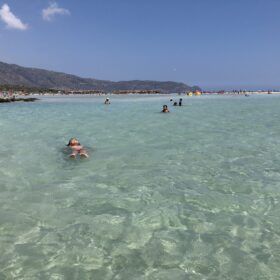 Elafonissi Beach in Crete with Kids

Tours in Athens for kids 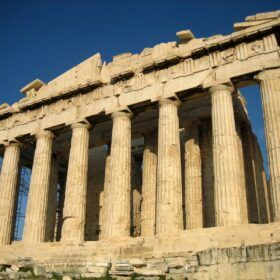 Anastasia is a mother of two young children in Crete. She writes about her life and Crete for Family Experiences Blog. A blog created by parents for parents full of invaluable tips and ideas for people who live in Greece or are interested in visiting Greece with their kids.